Are you a teacher or homeroom parent responsible for hosting or planning a class party soon?


Check out these games for inspiration. They are Christmas versions of traditional party games but could be adapted to suit any holiday or theme.
Musical Gift/Hot Gift Game
This is a version of the hot potato game (or musical chairs, if you prefer).  In this game, the players sit in a circle passing a 'hot' gift quickly around the circle while music plays. When the music stops, the player left holding the gift gets to unwrap a layer of paper.   The game continues until the last layer of paper is removed and that player keeps the gift.

In this instant, the gift was a large Hershey bar wrapped in about 10 layers of varied giftwrap.

Talon got to unwrap a layer of paper!


A very good game to increase motor skills and teach sportsmanship.
﻿
﻿  Most of the kids loved playing this game but there were a couple of disgruntled players-- maybe they need to play again!

Snowball Toss
Toss the balls through the holes and win a prize. Harder than it looks since the styrofoam snowballs are light. Only two kids won prizes but they all had fun and there were no bad sports.

Yes,  my silly 'ham' of a boy was the only one who acted out scooping and forming a snowball.


Pin the Nose on the Reindeer
Played just like 'Pin the Tail on the Donkey'. The players who pin the nose somewhere on the face or closest to the face get prizes.


Mrs. R's party games were cute and fun. They made the party so much more memorable than just snacks and a movie.  Good on ya, Mrs. R! 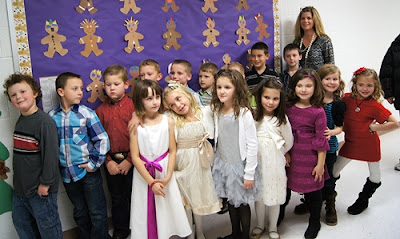 What a fabulously creative teacher! We are very grateful that Talon is in Mrs. R's class. He is having the best first grade year ever!
And not just because of the party fun, but because of the intense but fun focus on academics.  Talon has learned so much so quickly. 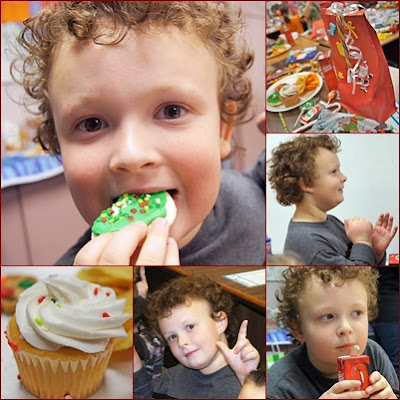 Hope these party game ideas provide inspiration for your next children's party be it at school/home/church.  Please share any ideas for adapting these games to other holidays/themes. What other children's party games do you recommend?

Just had an idea pop into my head for a little boy's Nascar birthday. Pin the steering wheel on the Nascar racecar.  What do you think?
Tweet
Pin It
Email ThisBlogThis!Share to TwitterShare to FacebookShare to Pinterest
Posted by Lesa at 2:34 PM