We don't choose our animals... they choose us... not of their own volition, poor things, but because they have been dumped. I take that back... the ones that stay do choose us. Fine by me... reminds me of the Murry family in A Wrinkle In Time.

We've been sans pet for about a year and Talon was getting tired of waiting. He still missed his little dog and regularly asked for another one. Well, in early february Midnight found us... not the hoped for pup but Talon didn't mind. He loves Midnight the cat.

I knew this cat wasn't wild because, even though it was wary, it kept hanging around in the brush along the fence line. The wild cats are a rare sighting; they skirt the perimeter and don't linger.

Food and friendliness didn't entice her to leave the brush until presented with... can you guess?... no, you'll never guess... it was a Sonic breakfast croissant! I guess in cat culture that means we are 'good people'. I opened the door a few minutes later and guess who was on the porch... yep, and she never left. Then she started trying to get in the house... so definitely not a wild cat. 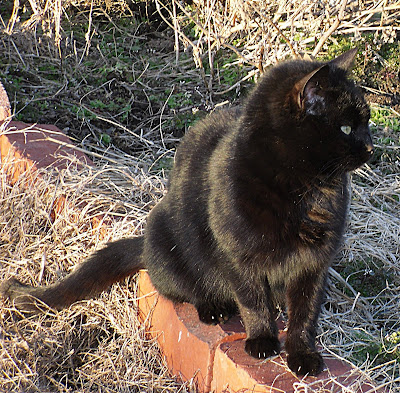 Sitting pretty... can't really see it but her black fur has orange highlights in the sun 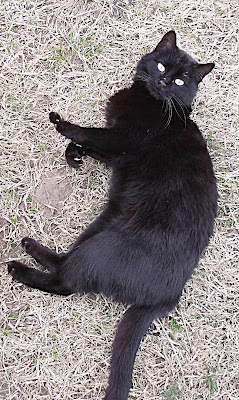 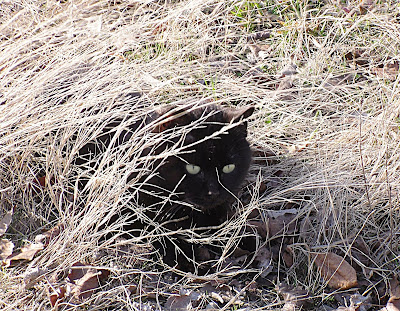 We haven't had a cat in years and I've often wished for a cat with hunting skills to keep the rural rodent population in check. Figured Midnight, an ex-house cat, would be useless but I was wrong. Not long after she adopted us, I found a huge dead rat outside the door. Midnight earns her keep on a regular basis.
The reason Midnight was dumped... here is a clue... strange deep meowing... no, not a voice disorder... she was in heat. About a week after Midnight became a porch cat, she entertained a visitor. An unusual looking wild tom... it looked like a cross between a jack rabbit and an Egyptian cat. Now, Midnight is a fat cat.
Tweet
Pin It
Email ThisBlogThis!Share to TwitterShare to FacebookShare to Pinterest
Posted by Lesa at 4:49 PM