When it rains it pours! After a year with no abandoned or stray animals adopting us, we get two in a month; Midnight the Cat in the middle of February and a Found Hound in the middle of March. 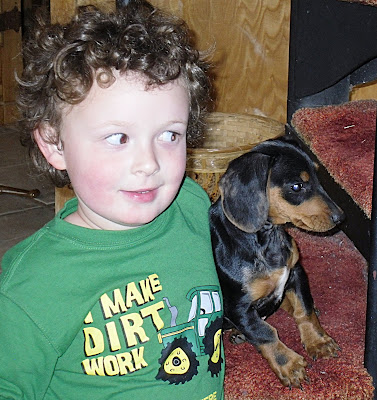 Pup came to us in a round about way. A man spotted this little dachshund by a watertower. The puppy was still there hours later so the man rescued it. He kept it a few days then passed it on to 'Big Bob'. Big Bob is a tall burly maintenance man who is just wild about dachshunds. Kind of funny since you'd expect to see him with a large breed.

Big Bob was so proud of this little puppy and showed it off at school. Jim immediately asked if there were more pups available and heard the 'found hound' story. No luck there so back to waiting for the next 'dumped' animal to show up on our doorstep.

The next evening Big Bob calls with sad news... His wife said: No puppy!
He was understandably crushed since he was already attached. Poor Guy! The pup had even slept on his bed. Hmm, maybe that is why wifey put her foot down.

Now we claim this pass around, hand-me-down found hound! 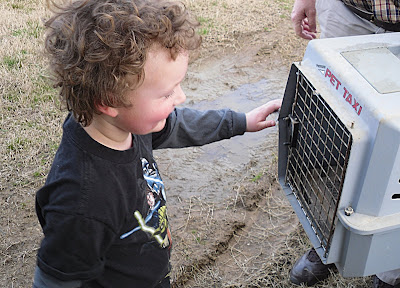 Talon knew nothing and was completey and estatically surprised! 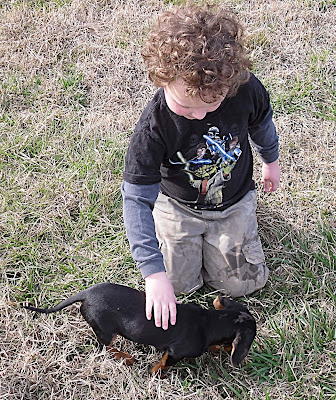 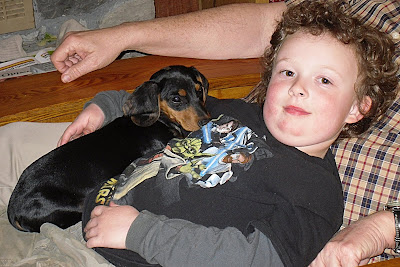 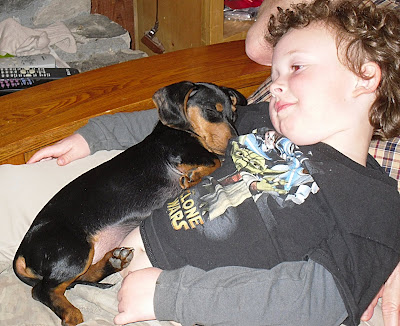 When Pup arrived she may have been close to three months old.. her teeth were still coming in. Can't imagine how such a cute little dog ended up abandoned by a water tower.

She is very happy here... dogs always love it here... good food, rabbits to chase, gophers to dig , creeks to splash and woods to explore... it is a virtual canine Shangri-la.


Midnight was a bit peeved with Pup's arrival but they get along now. Apparently, Big Bob's cat romped and played but Midnight isn't as into that... except when she wants to. Pup takes over everything... even Midnight's string game... you can see the cat's disgust when that happens.
But kitty gets her revenge... no rat for pup!

By the way, we have tried out many names for pup but nothing sticks.
Any ideas?